Feast your eyes: This is your first look at Andy Rubin’s $699 Essential smartphone!

The ambitious hardware project launched by Andy Rubin, the creator of Android, has today finally come to life. While we had been waiting for an official livestream, on stage debut, The Verge has provided us with an exclusive look at this gorgeous smartphone. It is simply called the Essential Phone and this $699 device is something to get pumped about — initially for U.S netizens.

From the very first look at the device, you’re greeted with a prominent edge-to-edge display that reminds you of Xiaomi’s Mi Mix concept smartphone. The latter device was shown off by the Chinese upstart earlier last year, setting the tone for how the displays will be stretched out in the coming months.

We saw first signs of the same with the Samsung Galaxy S8, which included an edge-to-edge curved display but also carried bezels on the top and bottom of the device. The Essential phone goes one step ahead of the Korean behemoth and makes the smart choice of stretching its 5.7-inch QHD display to the very top.

Andy Rubin’s team has opted to integrate the speaker below the screen and a camera in the dead center — because the notification icons on Android don’t appear there. There is a minimal bezel at the bottom but that chin won’t hurt any individual once they have seen the massive edge-to-edge display. It will be packed inside a tough body constructed with titanium and ceramic, with no visible branding or camera bumps on the outside.

Moving past the screen, the Essential phone is powered by the latest and greatest from Qualcomm — Snapdragon 835. It has been coupled with 4GB of RAM and 128GB of internal storage but there is presently no word on the inclusion of a MicroSD card slot. It includes a 3,040 mAh battery with fast charging capabilities.

It has further been asserted that the device packs most connectivity features and supports all major telecom carriers in the United States. There is a lack of 3.5mm headphone jack but an adapter will be included in the box. It also includes a fingerprint sensor on the rear, at the center and is powered by Android. It will be made available in four different colors — Black Moon, Pure White have launched already, while Ocean Depths and Stellar Grey are coming soon.

The Essential phone brings along a dual-camera setup on the rear end of the device. The implementation is, however not similar to what Apple (or most technology giants) are trying to accomplish. Instead, Rubin has made the right choice and decided to tread the path adopted by Huawei i.e integrating a regular RGB color camera coupled with a monochrome sensor.

The former can take usual photos whereas the latter will enable you to capture more light to further the quality of your photos. The front camera is also decent and packs an 8-megapixel sensor capable of 4K video recording. 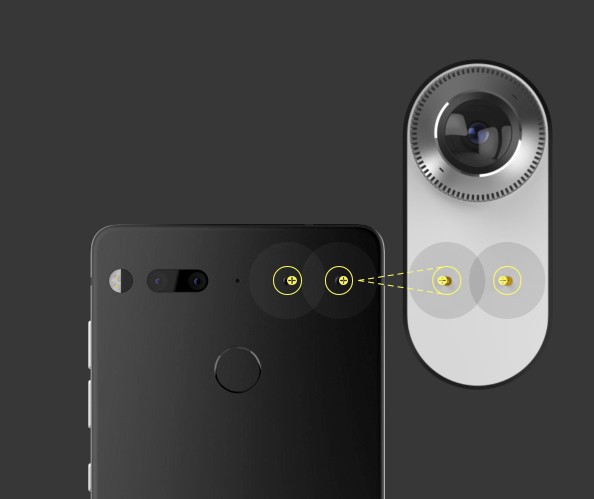 The highlight of this mobile device will, however, have to be the magnetic connectors available next to the dual-camera setup. Much like the Moto Mods, Essential is also planning to build an ecosystem of accessories revolving around its very first smartphone. Andy Rubin isn’t building cases to cover the entire rear of the device but is instead bringing along small magnetic connector based devices such as the 360-degree camera shown in the image above. It is also launching a charging dock bed for the device as well.

This smartphone marks the humble beginnings of an adventure, that is coupled with the release of other hardware devices such as the screen-based Amazon Echo competitor, modular accessories and a 360-degree camera accessory. But, that’s not all and there’s most likely more exciting hardware in store — under the brand name, Essential is trying to establish.

To watch Andy Rubin take the wraps off the Essential phone on stage at the Code Conference, tune in here at 6PM PT/9PM ET. Till then, comment your thoughts and opinions on the device down below.

AMD, a company that has always been the second fiddle to Nvidia…

The Indian smartphone market has been on a steady rise, and is…

Twitter has suffered an outage once again, with several users reporting that…

Amazon has launched Amazon.se, which will be Sweden’s own Amazon shopping…