After teasing us with a photograph of an 18-wheeler truck with the words ‘Uber Freight’ stenciled on its side, the ride-hailing giant is today taking the first step towards overhauling the trucking business. As announced via an official blog post, Uber is planning to simplify the daily routine of hard-working truck drivers by providing them access to the payload at the touch of a button.

That’s exactly where the idea behind Uber Freight fits into the equation. Mastering the art of getting people to hail rides through a mobile app, CEO Travis Kalanick now wants to induce a similar revolution in the trucking ecosystem. The said service was quietly debuted for testing in Texas earlier last year and that’s when we first heard about the company’s plan to enter this market.

Today, Uber Freight has been launched in the form of an app on Android and iOS and holds the power to transform the trucking business from the ground up. It works in a manner similar to the company’s ride-hailing app which matches drivers and riders to ferry them from point A to point B.

The idea here is, however, to accurately match truck drivers with shippers, who’re looking for a means to transport the goods. And you’re being handed down the power to choose the payload you’d like to haul within moments. You no longer have to meddle with any middleman or broker to gain access to loads to haul. The Uber Freight app works 24/7, pairing you with shippers without any negotiations or back-or-forth haggles.

Speaking on the ideology behind the trucking service, the official blog post reads:

We fundamentally believe that by focusing on drivers’ pain points we can solve the industry’s biggest challenges. Happy drivers mean happy shippers, and ultimately everyone benefits, including the end consumers of the goods.

One of the primary concerns for Uber with the cluttered trucking ecosystem was — payments.  In the blog post, it mentions that the truck drivers (and the companies, in general) had to wait 30 days or longer to sink a small business and get paid. The truck drivers had also complained that they weren’t even compensated for waiting multiple hours when the truck was being loaded.

The Uber Freight is aimed at eliminating the quirks in this pipeline by showing upfront rates for every single payload awaiting the driver’s acceptance in the app. It promises to pay the drivers within a few (about seven) days, fee-free, for every single load they transport — be it once per week or once a day.

And if the payment isn’t received on Uber’s end or if something else doesn’t go as planned, then the company will pay ‘accessorial charges’ to drivers in such instances as well. Talking about the same, the blog post reads,

We want our carriers to know Uber Freight has their back when it comes to accessorial charges too. We are publishing our accessorial rates so that our users know what they can expect when they take an Uber Freight load. 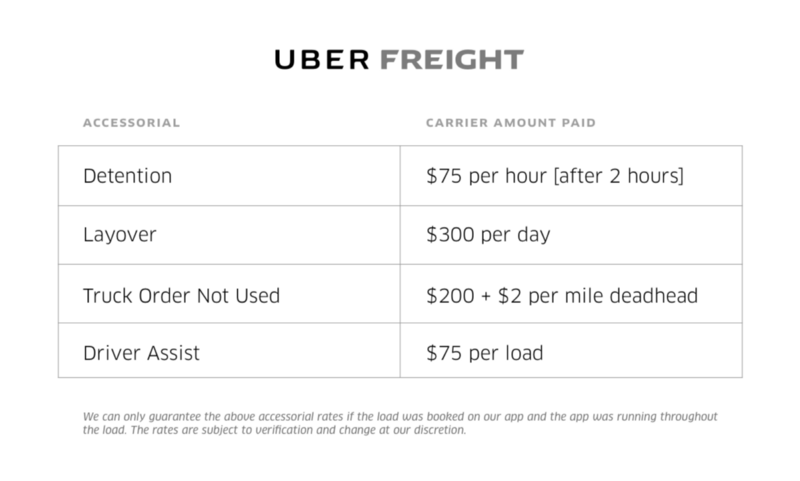 In the United States, truck drivers can be credited as being the heart of the economy. As per official government data, the trucking business touches at least 70 percent of the country’s goods and haul around a whopping 14 billion tons of freight every year. Truck drivers take a great deal of risk when transporting goods to its destination as they have to bear any losses caused due damage. CEO Travis Kalanick is flipping the coin in this arena and awaits the outcome — which needs to be positive, considering the negative PR Uber has recently been surrounded with.