Zomato reported its first quarter (Q1’23) financials late evening yesterday, and there seems to be some definite improvements in its revenue and loss numbers.

To start with, adjusted revenue for Zomato stood at ₹18.1 Bn, a 56% increase from the same period last year. As expected, food delivery business was the biggest driver of this growth, accounting for ₹1430 crore for the first quarter of FY 2022-23. In its quarterly earnings report, Zomato reported  ₹6,430 crore in Gross Order Value as against Rs 4,540 crore in the year-ago period.

The company has been under pressure on the public markets, ever since the mandatory IPO lock in period ended, resulting in several institutional investors emptying stakes. The stock did see some recovery towards the end of previous week, but was again in the red yesterday end of trade, largely on the expectations of an earnings release.

Losses finally seem to be on a downward spiral too. Zomato’s consolidated losses were down by nearly 50% to ₹186 crore in the first quarter from ₹360.7 crore in the same period last year. This marks a sequential reduction of 48%, from ₹359.70 crore in the fourth quarter last year. 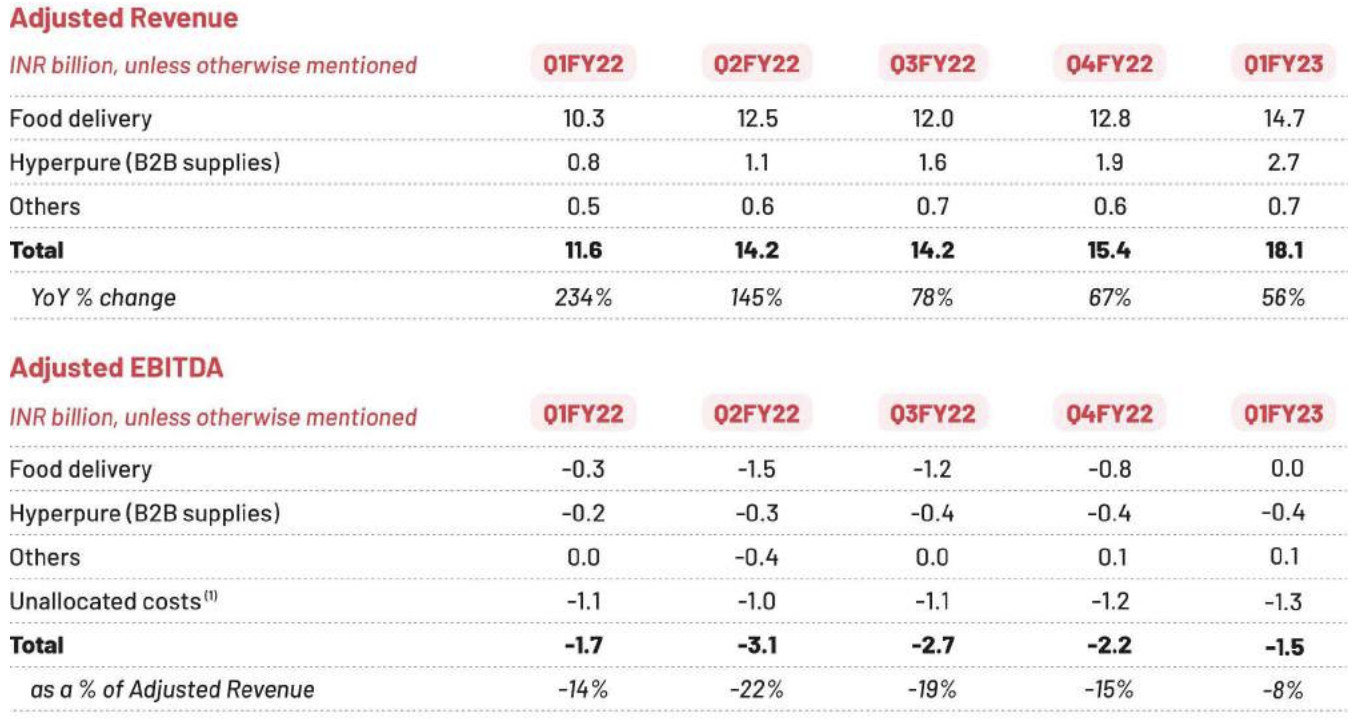 Zomato founder Deepinder Goyal, talking about these loss reductions, says, “The real driver here is focus and mindset. Our focus on profitability has sharpened over the past few months with the change in market context, without compromising our focus on growth. We are doing that by assessing everything with a critical lens and allocating resources by taking a long-term view to sustainable growth, as well as profit.”

“On the profitability front, the food delivery business hit an important milestone last quarter by getting to Adjusted EBITDA break-even. Contribution as a % of GOV increased to 2.8% in Q1FY23 as compared to 1.7% in Q4FY22 driven by improvements on both cost and revenue side, as we had indicated in the past.”, said CFO Akshant Goyal.