Well, this is unexpected. If you, like myself, have been searching for leaks relating to Apple’s event today, chances are, you did not expect to see an iPad. Well, Apple has not just launched one iPad- it has launched two. The company has announced the latest iteration of the iPad and iPad Mini, adding to its already huge lineup of iPads.

Let’s start from the most juicy part. The iPad starts at $299 for students, and goes up to $329. That’s some great pricing, but with all great things, come some cutbacks.

The huge bezels on the iPad just look outdated, especially compared to other offerings in the lineup. However, for the price, one might be able to look past this short coming, and I suppose that is what Apple is going for.

The iPad comes with A13 bionic chip, which offers a 20% bump in performance when it comes to CPU, GPU and Neural Engine. This can help attract users that have been put off by iPad’s weak performance (in case you did not catch that, I was being sarcastic).

The company has made sure to focus on the one part that people use iPads for the most-video calling. With the rise in remote learning and working, video conferencing has become bigger than ever. Thus, the company has empowered the front of the iPad with a 12MP ultrawide shooter with a 122 degree field of view. That’s not all, as the iPad will also come with center stage, which automatically detects human faces and readjusts the frame to put them in center. The feature is taken directly from the iPad Pro, but it is nice to see smaller models get some love.

The iPad will launch with iPadOS15, along with a translate app that will use the new and improved chipset to translate speech in real time.

The company also announced the latest version of the iPad Mini-the smallest device in the iPad lineup. And while the iPad did stay relatively the same, we can’t say the same about iPad Mini.

The smallest tablet from Apple supports a design overhaul, with an all screen look that resembles the iPad Pro. The liquid retina display size has been set at 8.3 inches, and offers 500 nits of brightness.

However, the update does not just end at design. Under the hood, the new iPad Mini offers a 40% bump in CPU performance, 80% bump in GPU performance and twice the neural engine power than its predecessor.

It also comes with 5G, which is a refreshing addition.

Moreover, it will come with the same front camera that we see in the new iPad, which means center stage for iPad Mini too.

The iPad Mini starts at $499, which is a little higher than iPad, but hey, you win some you lose some. 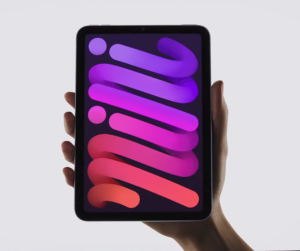 The pandemic has brought forth a digital revolution, at the center of…