WhatsApp, which is undoubtedly the biggest messaging platform on the internet, has been in hot waters ever since it announced a change to its policies and said that users will have to accept these changes or their accounts will be deactivated. This led to massive confusion among the masses, with people misinterpreting the terms for “WhatsApp will send your private chats to businesses”. To alleviate these concerns, WhatsApp has announced that it will be deploying an in app-banner on its platform to better communicate with its users regarding the changed policies.

Back in January, WhatsApp users started receiving a notification which infuriated them. While the Facebook owned messaging service touts itself to be secure, thanks to its end to end encryption, many feared that the new policy change will allow the parent app to see what messages they are sending to their friends. This led to many leaving the app in search for ‘more secure’ alternatives.

After seeing the backlash, WhatsApp quickly moved to issue a clarification, saying that the new privacy changes do not affect a user’s private chats, and only apply to communication with businesses. The company claimed that only data related to chats with businesses will be sent to Facebook, something that has been happening for years now. However, the damage was already done, and critique of the company’s new policies has not stopped since.

Moreover, the company ran into legal trouble in India, which decided to write to WhatsApp, seeking to get the update suspended.

Things got so out of hand that instead of deploying the update in February (like it was initially planned), the company decided to delay the decision to May 15, in order to better communicate with its users. WhatsApp started showing a ‘Status’ update about the new changes, and now, it is re-reiterating its policies.

Users will soon start to see an in app-banner, clicking on which will take them to a screen with information about the new update. Clicking the “review” button will bring up an even deeper summary, which will work to eliminate any doubts about the new policy changes 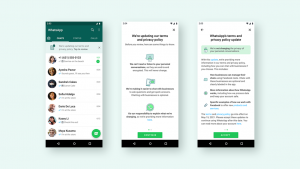 WhatsApp says that users like this over the ‘Status’ notifications, and thus, this change might lead to more people getting the correct information.

The company also took this as an opportunity to target other messaging services, which are using WhatsApp’s woes to attract new users.

“We’ve seen some of our competitors try to get away with claiming they can’t see people’s messages – if an app doesn’t offer end-to-end encryption by default that means they can read your messages,” WhatsApp’s blog post read.

This seems like a direct jab at Telegram, which often uses the term ‘secure’ to define itself, even though it does not come with end-to-end encryption as the default setting.

Nonetheless, it seems highly unlikely that any of the alternatives will surpass WhatsApp in the foreseeable future, despite the recent controversy.

Sound can charge your smartphone and other electronic devices. Sounds crazy right?…