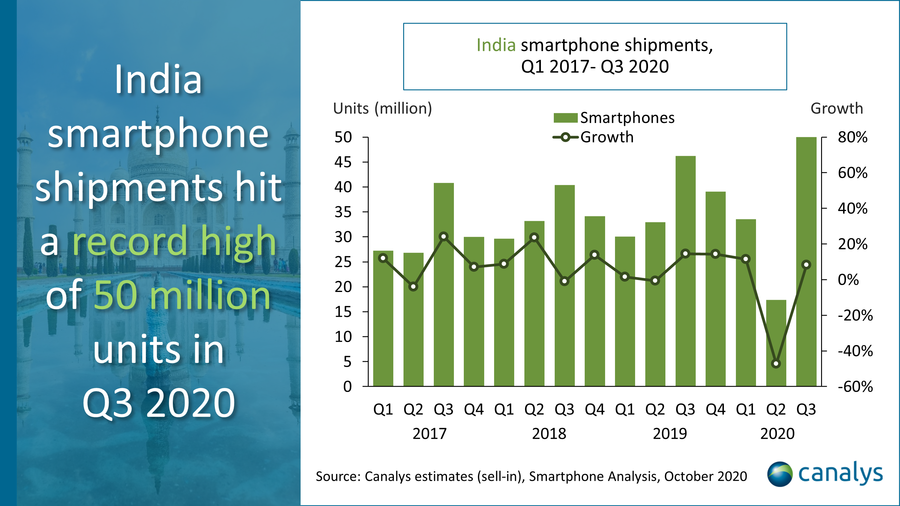 Chinese smartphone maker, Xiaomi, continues to be the market leader in India with a 26.1% market share. Xiaomi’s smartphone shipment grew 9% to 13.1 million units. Samsung’s aggressive pricing strategy seems to have paid off as well, as it took over Vivo to bag the second place. The Korean smartphone maker holds a 20.4% market share in Q3 2020, which is slightly lower than its share in Q3 2019, i.e. 20.6%. Samsung’s shipments grew 7% to 10.2 million units. Canalys attributes “aggressive product portfolio and pricing strategy in the low-end” to Samsung’s success. 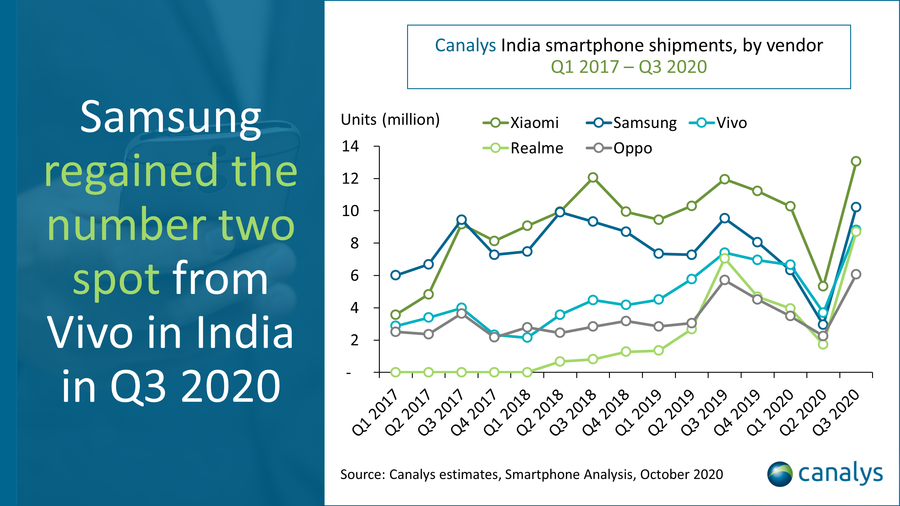 Vivo and Realme follow Samsung, ranking 3rd and 4th respectively. Vivo’s market share, which was registered to be 17.6%, stands close to Realme’s 17.4% market share in Q3. Vivo and Realme are the only two smartphone brands in the top 5 list with double-digit shipment growth. Vivo’s shipment grew 19% to 8.8 million units, whereas, Realme’s shipment increased by 23% to 8.7 million units.

Oppo closes out on the fifth spot with a 12.1% share in the Indian smartphone market. Its shipment rose by only 6% to 6.1 million units. All the other smartphone brands round up to a 6.3% market share together, which is embarrassingly lower than the fifth-placed Oppo.

Apple’s new venture in India with the online Apple store also seems to have paid dividends for the company, as it has registered double-digit growth in smartphone shipments to 800K units in Q3 2020. Rushabh Doshi, Canalys Research Director, said, “It has opened a direct online store, giving it several new angles in its go-to-market strategy, such as utilizing device trade-ins to provide purchase incentives, or bundling AirPods with iPhones to make them more appealing.” Rushabh also points out that going forward, it might get difficult for Apple to grow in India. The company’s poor pricing strategy with the iPhone 12s in India and the unavailability of 5G in the country, which is a prime feature in Apple’s latest flagship device, might not favor the Cupertino-based company.

Varun Kannan, Canalys Research Analyst, said, “Ongoing tension between India and China has been a hot topic in the past few months, but we have yet to see a significant impact on purchase decisions of mass-market customers.” As the report suggests, 76% of the total smartphone shipments were carried out by Chinese smartphone brands, up from 74% last year.

Post the Indo-Chinese border face off earlier this year, a national sentiment arose about boycotting Chinese products among the majority of Indian citizens. Even the homegrown Micromax has tried to benefit from this opportunity by setting its foot back in the Indian smartphone market with its ‘In’ smartphones. The government is also pushing for ‘self-reliance’, but as the Canalys’ report suggests, it does not show any effects yet.

“The government, slowly but surely reducing restrictions on movement after a three-month lockdown, has created the perfect atmosphere for sustained growth. While almost all vendors have shown positive shipment growth, the true winners are the online channels, who have been buoyed with a huge influx of devices ahead of the festive season. Ongoing sales at Amazon and Flipkart are a clear indication that despite the economic downturn, India’s penchant for a good smartphone, and a good bargain, remains intact,” said Adwait Mardikar, Canalys research analyst.

Android 13 is here, and it is set to make its appearance…