Stack Overflow is widely known as one of the most trusted Q&A platforms for coding. Hence, if you are or have been a developer, you definitely would have relied upon this community of developers. The website enables you to vote, comment and ask questions from the fellow developers. Now, the company has released an app for Android and iOS, almost three years after it launched Stack Exchange app.

The Stack Exchange app gives users an access to multiple Stack Exchange, covering a network of over 170 communities. So, basically, if you want to view all Q&A in one place, the app is for you to keep. Even though, the functionality of both the apps, are nearly identical. The new app, unlike the existing one, contains only Stack Overflow questions and answers.

Since its inception in 2008, Stack Overflow has been one of the most popular go-to platforms for programmers. With the increasing number of users on the website, the rollout of app definitely comes as a major relief to the users. Both iOS and Android versions can be downloaded, but the official blog states that the Android app is currently in beta. It further adds the app is mainly without any bugs and all of the functionality is working. However, small tweaks to the user interface can be seen when the stable version releases.

The company also released some statistics revealing the developer interest in various platforms. Most of the questions regarding about mobile development come to Android and iOS. One of the graphs indicates that Blackberry and Windows Phone are not witnessing the traction as high as the former two. The decline in the developer interest of both the platforms can be regarded as the major reasons why the Stack Exchange has not released a version for these. 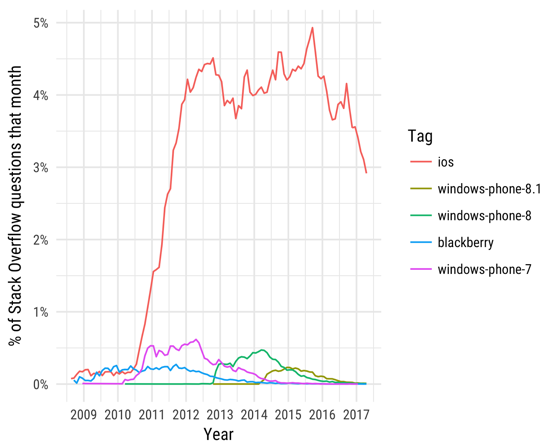 Apple has seen growth, the likes of which we have never seen…

After a slump in the second quarter of this year, primarily due…

One of the most popular music streaming services in the world, Spotify,…