In line with its ongoing Build 2017 developer conference, Microsoft today released a pre-recorded video to make developers aware of the progress it has made on the ARM device front. It not only gave us the first demo of Windows 10 running on an ARM processor but also how the rumored x86 emulation will come into play for running most apps seamlessly.

As announced by Terry Myerson back in December, Microsoft had already shared its plans for the initiative of porting over Windows 10 to run on ARM-based devices. It was then said that the complete Windows 10 experience will be made available on ARM devices by the end of this year, through the next major ‘Redstone 3’ update. The official name of this update is Fall Creators Update, which falls short of creativity itself.

As seen in the demo video attached above, two Microsoft engineers show off a device running the complete 64-bit “Windows 10 Pro” installation, complete with the rich desktop experience. This ARM-based device is powered by an octa-core Qualcomm Snapdragon 835 chip, clocked at 1.9GHz, coupled with 4 GB of RAM. This means it packs all significant Windows 10 features, such as Cortana, Edge, and Windows Hello.

But, the highlight of this Windows 10 installation will have to be the ability to run both x86 Win32 apps, as well as Windows Store apps on the same platform. We had earlier only heard rumors of this emulation layer being baked into Windows 10 but the Redmond giant seems to be quite serious about giving this initiative a push for the good. This can enable them to finally make their way into the mobile space, providing access to a whole wide variety of Windows software and ARM-compatible UWP apps.

The Microsoft engineers have explained how the ARM emulation layer works to make x86 Windows apps compatible with the software. There is no developer knowledge required to make this technology work and may soon be used by several Windows 10 users. The x86 emulation is transparent to users and installation of apps works normally, as one could expect on a Windows PC.

This employs the WOW (Windows on Windows) emulation layer to make legacy apps look and work like the real thing by extending access to underlying kernel, drivers, and other system components. The 64-bit installation is able to run 32-bit Windows apps using the same tech. On ARM, CPU emulation happens in software while 64-bit Windows does the same on hardware. And from what it looks like in the demo, we could soon have a gala time running Win32 apps intuitively on ARM-based PCs. 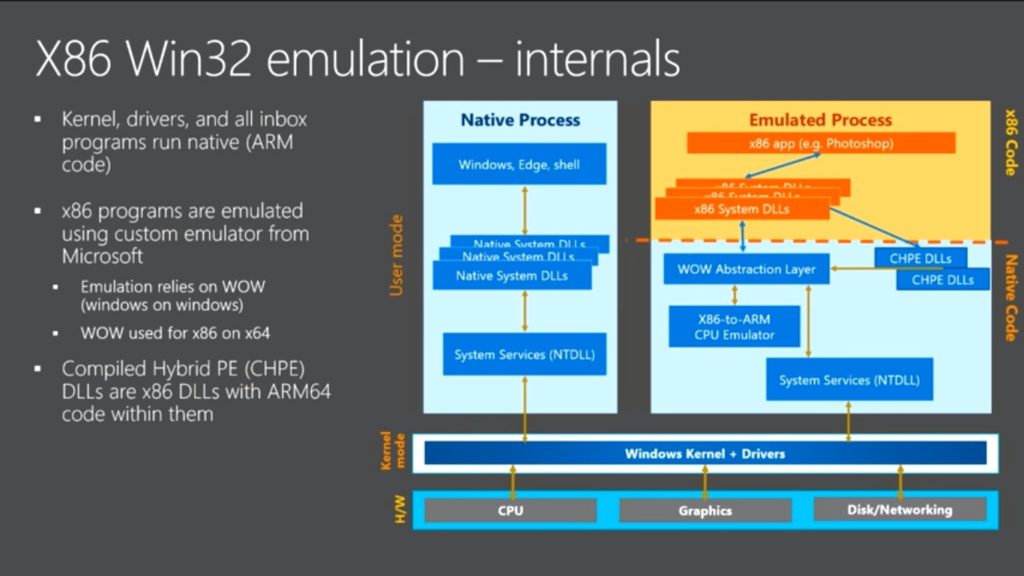 While Microsoft has shown off the capabilities of ARM-based Windows 10 devices, we’re far from getting out hands on one of these in the near future. The engineers in the demo video are themselves on an experimental prototype made available to them by leading chipmaker and its primary partner — Qualcomm. The final devices and emulation features will go live with the Fall Creators Update packed into new ultrabooks and 2-in-1 hybrid laptops, initially from its hardware partners.

There is yet another experimental app out from Facebook’s NPE team, this…

Donald J. Trump said that he, as President of the United States…