Apple updates its jobs creation website, touts it is responsible for 2 million jobs in the U.S

Alongside the announcement of its quarterly earning numbers, Apple has updated its job creation website with latest figures from the fiscal year 2016. The statistics on this website are renewed every year to reflect Cupertino’s valuable contribution to the United States’ economy, which is drawing heavy attention post the election of President Donald Trump earlier this year.

The numbers tell the story. Apple is one of the biggest job creators in the United States, responsible for two million jobs in all 50 states.

On the website, Apple has boasted about its contributions to the economy – which specifically includes the creation of a total of two million jobs across fifty states of the United States. If you are not aware of the number of people Apple employs, here is the current figure – 80,000 – higher than the previous 76,000. This means there are 29 cities with 250 or more employees and 44 states with an Apple Store.

They span across a broad range of roles, like designers, scientists, construction, manufacturing, retail, customer support, marketing, hardware, and software engineers. It includes over 13,000 customer support personnel for North America and includes the massive number of Apple Store employees as well. It can be seen as a 1500 percent increase in the number of employees since 1998. 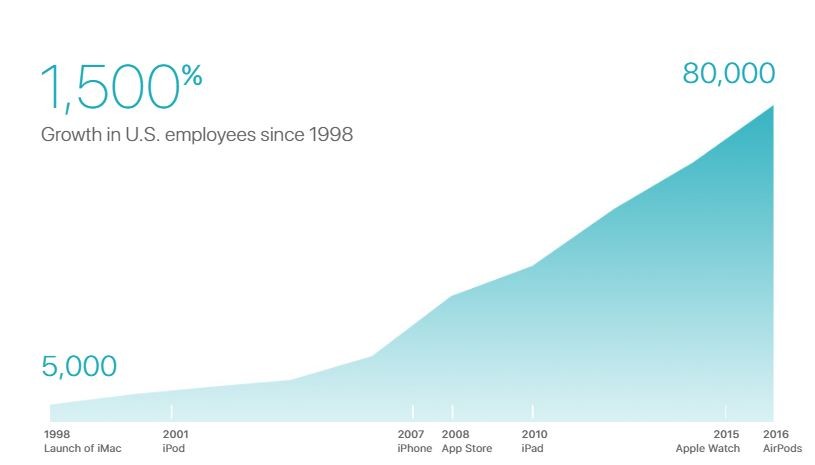 In addition, Apple has also touted that it spent more than $50 billion in the United States last year while working with over 9,000 suppliers and manufacturing giants. Out of the total 2 million jobs, this division has created 450,000 jobs in the previous year and that’s 90,000 more than the 361,000 figure in 2015.

If category still isn’t clear to you, the website asserts that it includes ‘people who manufacture components for our products to the people who distribute and deliver them.’ And Cupertino is known to source the internal components of all of its major devices, like the iPhone, iPad, Mac, Apple Watch, and Apple TV, from the States. And this could further receive a push when Foxconn makes its formal entry into the country — a plan which is already on the cards.

Also, Apple has counted the software/app developers for the iOS apps for the App Store — which was first launched in 2008. Since then, the app revolution has expanded its grips and generated more than 1,530,000 U.S. jobs, up from 1,400,000 last year. Apple’s App Store has generated earnings worth more than $16 billion for U.S. developers in the last decade. Here’s a breakdown of the app developers in the U.S, on the basis of each state: 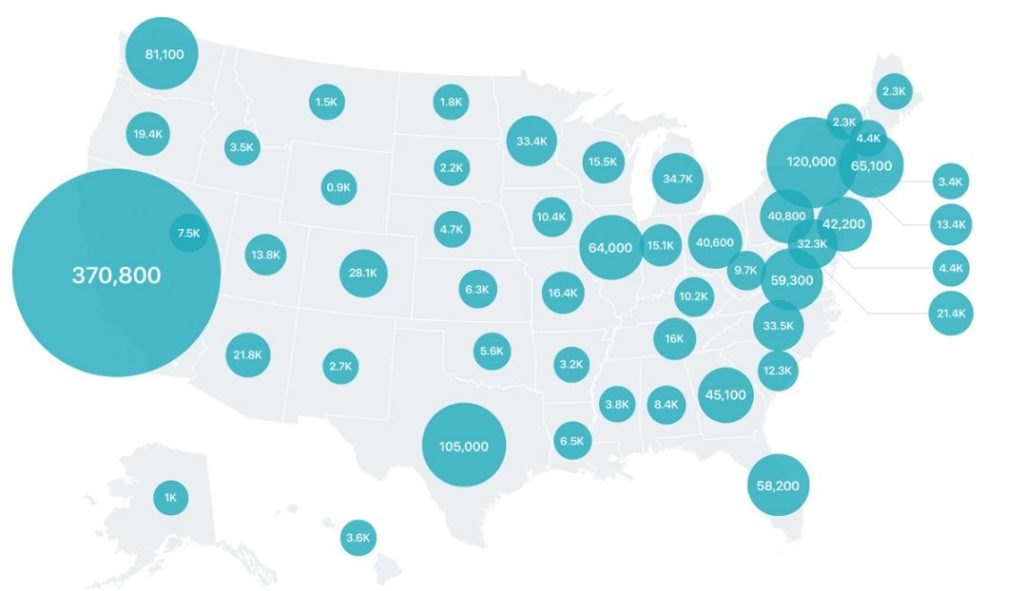 The numbers posted on this website might be significant but Apple is now working towards the creation of more job opportunities within the States. In an interview with CNBC, Apple CEO Tim Cook has announced the formation of a brand-new $1 billion fund. It will be directed towards the promotion of advanced manufacturing jobs — which was kicked off with a Mac facility back in 2013 — in the country.

Talking about how the Cupertino giant plans to employ the funds, Cook said: