Apple is planning to take a second crack at the addition of a touchscreen to its MacBook, but the approach described in its latest patent is completely different. The Cupertino giant is not upgrading its recent MacBook Pro innovation, the tiny secondary display above the keyboard called the Touch Bar. Instead, it has now ideated an ambitious laptop-like docking accessory which will house your iPhone or iPad, to power the same.

In the patent spotted by Apple Insider, the company has primarily focused on two general concepts for their docking accessory. One is where you will be required to place your iPhone into the slot which is present in the section usually housing the trackpad for the laptop. The other concept pushes the boundaries a lot further and images you plugging in your massive touchscreen iPad in the capacity that is provided in place of the display.

The laptop docking device, which will most likely be a dumb casing with additional power, connectivity options and ports, will have to be powered by the device being docked into it. This means that your docked iPhone or iPad will become the brain of the accessory and provide it with necessary computing power (processor), graphics, memory, and internal storage. The laptop accessory could, however, include a GPU to help power the large retina display. 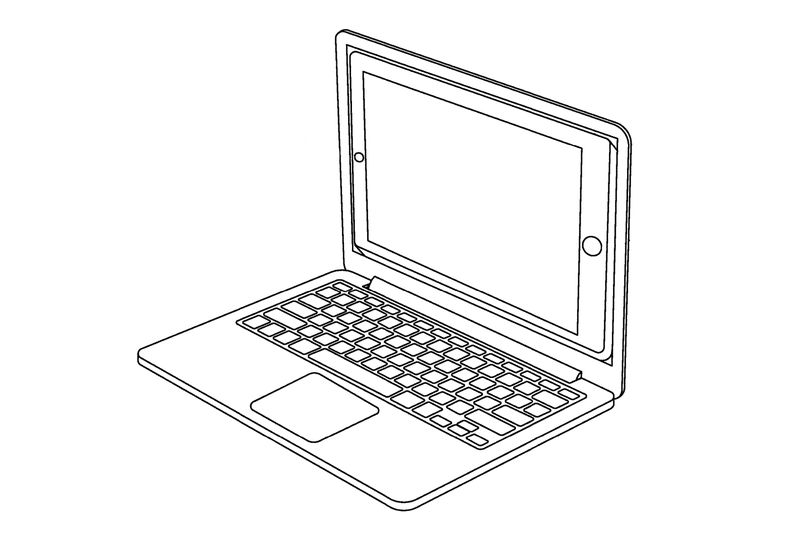 The working of the docked Apple device is self-evident from its placement in the accessory. The iPhone is being placed in the position of the trackpad, so the said touchscreen device will take on the said role. The docked iPad, on the other hand, can only act as one piece of the puzzle in this laptop accessory — the screen. This means that Apple might be looking to emulate Microsoft, who has been trying to bring the smartphone experience to the big screen with Continuum (does it still exist? haven’t heard of it for a while).

Apple’s patent filing is complete with diagrams and further suggest that the accessory will most likely be a MacBook clone, thanks to the mention of aluminum as an ideal enclosure material. There is also a mention of how the docked device and the accessory will be able to transfer data and commands between each other. And the answer is Wi-Fi, Bluetooth or any other wireless protocol. There is no surety of this, but the dock could pack within a secondary operating system or firmware that converts the iOS experience into a laptop-ready version.

The patent filing is quite technical and heavy-worded but here’s a brief description of the MacBook Pro-esque accessory:

This patent filing from Apple is relatively recent. It was filed for approval back in September of last year and has first been published just today. It is, however, not the first time that a tech giant is exploring the idea of docking a powerful hand-held device into a laptop accessory. HP already has one such docking accessory called HP Elite x3 Lap Dock out in the market. It allows you to insert a phone into the slot beneath the keyboard to power the same. It costs a hefty $600 to make the said transition.

Well, this is just a patent filing and numerous such patents don’t make their way into becoming official products. Also, an Apple dock accessory will break your bank, in addition to the iPhone or iPad. Do you think Apple will ever release such accessory docks? Comment your thoughts down below.