While Amazon is looking to solve last-mile delivery problems with the use of drones, its competitor Walmart plans on employing them within its retail stores. Yes, drones could soon become in-store employees to help you procure your daily supplies at the retailing giant.

Initially reported by Fortune, Walmart has been granted a patent which imagines a drone delivery system that will shuttle the products from one department to another inside the store. The drones will be employed as messengers to help simplify the purchase process for the extensive crowd of customers who visit its brick-and-mortar stores on the daily. In the patent filing, Walmart says,

[Drones] can greatly improve the customer experience without overburdening the human associates of the facility. Waiting can contribute to reduced customer satisfaction.

Thus, the primary aim of deploying this drone-based system would be to minimize the time its customers spend walking around their super-sized stores and collecting products. This will also be employed to reduce the time you spend waiting for employees to return or make their way to you from a far-end of the store.

Further, the patent document mentions that Walmart is keeping the security of their customers a top priority. It states that flying the drone above customers’ or employees’ heads doesn’t pose any immediate safety risks. But still, the retail chain behemoth is designing its drone delivery system to maneuver using a pre-determined path over the high-rise shelves instead of the aisles themselves. This is expected to provide customers an increased sense of security while shopping as the drones will be flying high enough to avoid any sort of collisions, says Walmart.

As for the functioning of the delivery system, Walmart plans on installing a central computer system that would act as the automated air traffic control for the drones. Similar to an airplane control room, it will determine flight paths, dispatch drones and monitor the same when they’re out and about helping customers pick products. The drones will be affixed with a cohort of sensors to help it steer clear of obstacles, especially customers (if one of those is sitting on the shelf, by any chance). 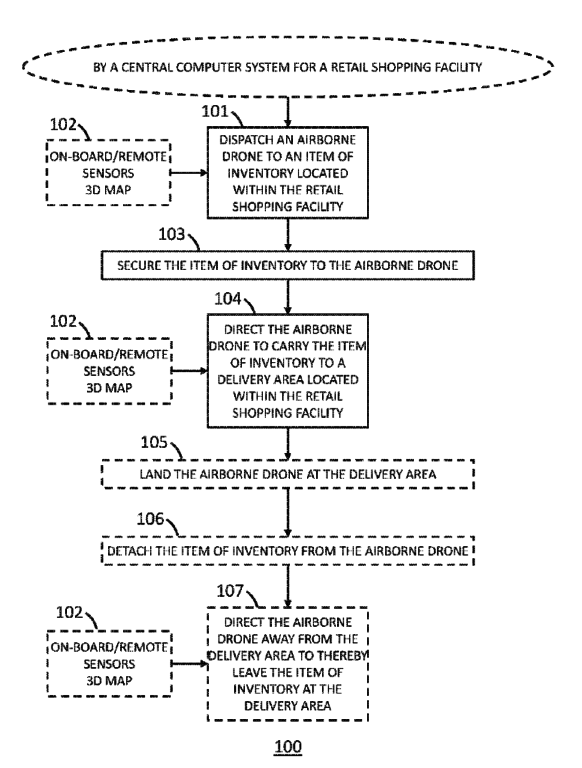 To further streamline the drone flight mechanism, Walmart will be setting up landing zones across its stores. While some of these are expected to be visible to customers (as they’d collect the ordered items from it), the other would be hidden from plain sight. The retail giant will make the drones capable of capturing and carrying the product to the customer using hooks or nets.

But, Walmart assumes that there may be some products that might require human intervention. And it is planning to develop a system for the same, where a nearby employee will receive specific instructions via text message or an exclusive app. This concept sounds just so fun and interesting to implement, but mind you, it’s still a patent filing. Walmart might be working on this futuristic technology but we shouldn’t expect to see it implement across the stores anytime soon (or never).