Whoa! Whoa! Whoa! Not even the democrats presumed to go quite so far. The man has the nuclear codes in his possession for heaven’s sake, and a none too calm temperament to boot. Disregarding the world’s largest nuclear arsenal, disregarding the fact that he is now the president of the United States, someone at McDonald’s thought it would be funny if they called Donald Trump a ‘disgusting excuse of a President’ on Twitter’.

You could have gotten away had you used Facebook, but Twitter? I mean there were rumors that his presence had caused an increase in activity over Twitter. Although the company later clarified that product changes were more important growth drivers than President Trump’s tweets. That said though, Trump is known to be an avid Twitter user. And you can be sure that screen-shots of MacDonald’s extra spicy tweets are dong the rounds of the web even after some sane person at the company took the tweet down.

@realDonaldTrump You are actually a disgusting excuse of a President and we would love to have @BarackObama back, also you have tiny hands.

It mentions Donald Trump, and the someone who posted it, pinned it to the top of the page as well.

And the reference to tiny hands? Now that was adding insult to injury and was totally uncalled for. Err…..perhaps it also bears mentioning that former president Barack Obama — who has also been mentioned in the tweet — had a press secretary with the name Robert Gibbs. Mr. Gibbs is currently in charge of the company’s PR. Ouch!

Meanwhile, McDonald’s has issued a statement in which it claims that its Twitter account had been hacked. Take a look and do read the first comment that follows: 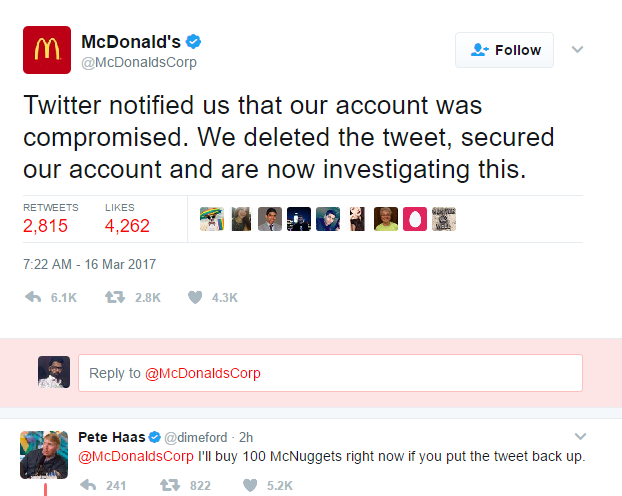 Now would you really blame Trump if he decided to make possession and consumption of products with a “Mc” before their name? Meanwhile, this is very likely to actually have been the work of a hacker, although no one has claimed responsibility for the deed yet — which is kind of strange, since it might well make them instantly popular.

Well, it could just as well be a disgruntled employee, or someone who got his fries burnt. Let’s see if the US President choses to respond.