UPDATE [7:30 P.M IST]: While we’re still unaware of the identity of the ex-female employee ‘Indian Fowler,’ who’s alleged TVF CEO Arunabh Kumar of molestation and sexual harassment but other female supporters of these claims have now also started popping up. And it further adds to the already damning evidence against the man.

The latest piece of evidence against TVF’s founder has been made public by writer, director and co-founder of stylised video content startup CATNIP Reema Sengupta. She confirms the allegations made by the anonymous female TVF employee saying that she is not the only one that Arunabh has been a “sleaze” to. Then she recounts the ‘uncalled for’ advances — like placing his hand on her’s, inadvertently finding ways to touch her tattoo or waist — which the founder made towards her. Sengupta adds that she was creeped out with his behavior at the 5-hour promo shoot but decided not to voice her concerns in order to protect the client as well as the agency. She did tell about it to some on her teammates present at the sets but made no official harassment or molestation charges against him. Here’s the complete reply posted by her on Medium:

To everyone doubting if this is true, know that this girl definitely isn’t the only girl he has been a sleaze to.

I was shooting with him in the TVF office, for a web series I was directing last year. The first time we met at the recce, he asked me to send him my work, which I did out of courtesy. When we met on the day of the shoot, I asked him if he had seen the links. To this he said – why don’t you come over to my place and we can watch them together. We can also watch a movie. Which movie do you want to watch? I politely evaded the question and continued briefing him about the shoot. As I talk, he finds some lame excuse to place his hand on my hand (which was on the table in his glass cabin). In the middle of the shoot, he touches my shoulder tattoo and tells me he finds it sexy. After every other shot, he would come over to the monitor to see how the shot looks, but at the same time graze his hand against my waist. All this in a 5-hour shoot. I can only imagine what she must have gone through for 2 years!

I remember telling my producer how creeped out I was and how I couldn’t wait for the shoot to be over. He made sure I wasn’t alone with Arunabh for the rest of the shoot. I also told someone at the agency we were working with about it. In fact, this article was sent to me by a friend who knew what had happened with me, asking ‘Same guy, no?’. Do I wish I had retaliated immediately? Yes. I didn’t because the agency and the client would have both suffered. In hindsight, that was wrong and I’m sure they would’ve supported my decision. But today, I had to choose between keeping quiet and extending my support to a girl who has bravely spoken up. So I am choosing to do the right thing. TVF can release as many ‘official responses’ rubbishing these claims as they’d like. This is my truth.

Indian Fowler, whoever you are, please get in touch if you need help.

So, while TVF might’ve posted an official statement denying the charges of sexual harassment and molestation against the founder and CEO Arunabh Kumar but it seems the story still has some plot twists that may take everyone by surprise. And with a collective of females now standing up against him and voicing the similar concerns make us think if the allegation are actually definitive.

PREVIOSULY: The surprising and unexpected tales of workplace sexism and harassment have today made their way from the offices of Silicon Valley to India. On the heels of Uber’s massive sexual harassment outburst, one of India’s largest, new-age media and entertainment powerhouse — The Viral Fever (TVF) is now under fire for the same.

TVF’s founder and CEO Arunabh Kumar has allegedly been accused of “abuse and molestation”  by a former female employee via an anonymous blog post on Medium. Since this blog post has been penned under the ghost name “Indian Fowler”, there is currently no way to confirm the authenticity of her allegations against the founder of this media powerhouse. But, another former TVF employee Aayushi Agarwal has stood in support of the anonymous ex-employee (who claims Arunabh knows who wrote this) in the comments section of the blog post.

In the blog post, the former employee (let’s call her Gita, for the sake of simplicity) brings to light Arunabh’s alleged lewd remarks and the instances of harassment —  where he directly solicited her for sex. Gita begins her account by first highlighting the fact that she and Arunabh shared the native city i.e Muzaffarpur in Bihar, which she learned during her interview in 2014. She further adds that the CEO charmed her pants off (not literally!) by sharing his struggles and vision in setting up the uber cool startup TVF.

Gita then adds that while most of the TVF team was back home running the show and making things happen, Arunabh was out hiring talent to build his dream team. The same one, which Gita had now become a part of, only to later realize that she was just a mere pawn in the toyful game Arunabh was playing. The same has been described in the blog post as under,

The answer was, he is hiring talent. Yes. He was hiring. Talent or not i don’t know. 3 years down the line I know what he was hiring. He was hiring his toys. Yes people this is my story of abuse and molestation.

And then, Gita relays to us an incident which took place just twenty-one days into her job at TVF — the hottest destination to be at. She says that Arunabh called her back to the office one day saying she had left without completing some part of her work. When she walked back into the office (which was rather empty), Arunabh instead of talking about work blatantly called her out of being brought in on a commercial deal — by which he refers to her a commercial sex worker (CSW) at the red light area.

Arunabh is sitting on a Chair in a casual manner. I walk up to him. He looks at me and asks me — “ Chaturbhuj Sthan ka naam suni ho”? I am stunned. For Non Starters, Chaturbhuj Sthan is the Red Light District of Muzaffarpur. I didnt respond.

His second question- “Humko Chaturbhuj Sthan Bahut Pasand Hai. Udhar commercial deals hoti hain. Tum Bhi to commercial deal pe aayi ho”. I was getting where he was leading the discussion to. I avoided an interaction.

None of this was something i had ever asked for. I ran away. Locked myself in the toilet. And cried. He went away.

In addition, Gita has written about several other instances which even involves mention of some big brands and stars such as the Ola team, KRK and Naveen Kasturia. She adds that Arunabh would act drunk and slyly try to either lift her up or fall upon her. And this is not is. She even claims that during an Ola team meeting, he called her out for a quick discussion and solicited her for sex once again. She, tired of being dragged on at the workplace, decided to never visit TVF’s offices even when the legal team kept troubling her for a breach of contract.

These anonymous claims haven’t been verified but another TVF employee named ‘Aayushi Agarwal’, whose name appears in one of Screen Patti’s videos has come out in support of Gita. Agarwal says that she had been plagues with similar experiences and decided to depart the media giant under bad circumstances. 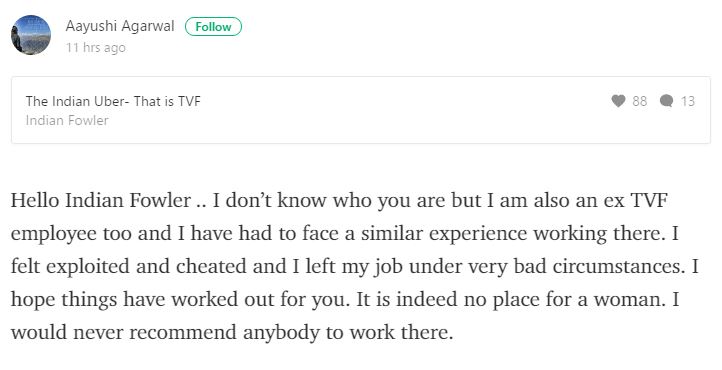 Further, if proven to be true, these allegations could have far-reaching effects on TVF’s brand image. The said allegation could be more damaging for this fledging media brand as compared the $68 billion ride-hailing giant Uber. This is largely because molestation charges have been brought up against the founder of the company as opposed to an employee, which was the case at Uber. Moreover, considering that TVF i a new-age, for-the-youth media brand, this could hit its brand image, real hard.

In a statement from the company though, it says,

This is an official response from TVF on the anonymous article published on Medium by the Indian Fowler. The article is completely ludicrous and defamatory against TVF and its team. All the allegations made against TVF and its team in the article are categorically false, baseless and unverified. We take a lot of pride in our team and in making TVF a safe workplace that is equally comfortable for women and men. We will leave no stone unturned to find the author of the article and bring them to severe justice for making such false allegations. It is our humble request that you do not share an unsubstantiated, unverified and anonymous article such as this.

This article was updated to add the statements of TVF towards the end.