Mozilla launches ‘Firefox Focus’, a private browser for the iOS

In what is yet another attempt from Firefox (and its creators) to get back into the mainstream browser competition it once was a significant player of, Mozilla is today announcing the launch of ‘Firefox Focus’, a private browser designed for Apple’s iOS ecosystem.

We live in an age where too many users have lost trust and lack meaningful controls over their digital lives. For some users, it seems as though your web activities can follow you everywhere – across devices, across accounts. To make matters worse, the web can often feel cluttered.

Firefox Focus is a private, simple-to-use browser which deletes all your cookies and history automatically (wiping it completely clean) and blocks ads and a lot of other trackers that follow you every time you go on to the web, by default. The new ‘Focus’ browser makes private browsing a completely hassle-free experience for you, so that you don’t need to change privacy or cookie settings. 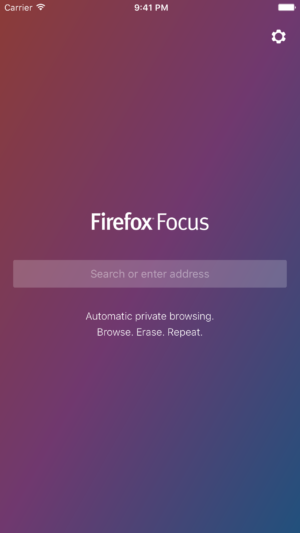 The ‘Firefox Focus’ however, isn’t an entirely new launch from Mozilla. The app was originally launched on the App Store almost a year ago, but serving purely as an ad-blocking utility at that time, that could remove ads and trackers from iPhone’s Safari browser. Now, it is taking on the entire Safari itself. It however, continues to operate as a Safari content blocker on iOS, and users will be able to take advantage of Tracking Protection on both Safari and Firefox Focus.

Also, since most websites these days slow largely because of the multitude of trackers they have running under the hood for them — some intentionally, some by default — Firefox Focus also results in much faster websites and webpages, since all sorts of trackers are switched off here, by default.

The browser is an extremely simple thing to operate actually. It does not have tabs, no fancy settings/preferences menu and nothing colorful, which you see in your regular browser today. It comes with a straight forward Settings menu which lets you toggle on or off, all the data which you wish to hide from the internet. It has an ‘Erase’ button which lets you erase your entire activity, once you complete one web activity.

Oddly though, Firefox Focus uses Yahoo as the default search site rather than Google, which  — again — quite odd considering all the kinds of leaks that have been happening at the company’s email service.

While the timing for the launch — amid all the privacy cries in the US right now, specially after an extremely bitter election battle with suspicion of fake news and all — is perhaps right for Mozilla, it is still too late to the party.

Almost all major browsers — Chrome, Safari and Edge to be specific — already allow users to block all of these trackers in a private mode tab they come with. The late launch once again shows, how Mozilla’s Firefox — in a coincidently similar way (completely different domain though) to Nokia and Blackberry — has been unable to embrace the rapidly growing mobile age, and has been far left behind.

Facebook has been rolling out new features for quite some time –…

Last one has been a long week for Wall Street and companies,…

The internet continues to be an unsafe place, especially increasingly for women.…
Go to mobile version