Instagram confirms it is working on a Repost feature

Instagram, after being in existence for well over half a decade, is finally coming to terms with the fact, that people need to ‘repost’ content after all. And while everyone else around the social media sphere had that basic necessity of a feature, Instagram is also finally getting one.

With a very original name – Repost – the feature is yet to be released to the entirety of Instagram’s 1 billion+ users. Meta confirmed that it intended to begin testing it with a select group of users in the near future.

“We’re exploring the ability to reshare posts in Feed — similar to how you can reshare in Stories — so people can share what resonates with them, and so original creators are credited for their work,” a Meta spokesperson told TechCrunch in an email. “We plan to test this soon with a small number of people.”

With reposts, users no longer have to send posts that they want to share with their friends and followers by sharing shortcuts to those posts on their Stories (which expire after 24 hours). Instead, they can now directly repost the content on their own feeds.

Once users repost content on Instagram to their feeds, they will be shown in a separate tab on their profiles. Their followers will be able to see them on the separate tab. And unlike Stories, Reposts do not have a 24-hour time limit and remain on the tab. 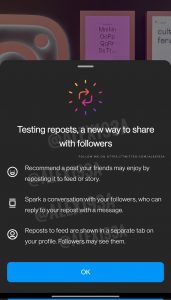 If this is not enough, Instagram is also making this a more interactive feature by giving the followers the ability to reply to the reposts with a message.

It was mobile developer Alessandro Paluzzi who had first informed that Instagram was working on the Reposts feature. That was back in May, and screenshots shared by him showed that the repost option could be found in the share menu.

ℹ️ Reposts will be saved in a separated tab on your profile pic.twitter.com/7bduidntwE

And now, an update by social media consultant Matt Navarra on Twitter showed the same.

If you think this sounds remarkably similar to Twitter’s “Retweet” feature, then it is because it is. Instagram has “borrowed” it and is tweaking it to add it to its own platform, which would help it in its competition with TikTok. The Chinese upstart has been working on a similar repost feature, although reposted videos will not show up on the profiles of the reposters.

With Apple accelerating its diversification plans for manufacturing of hardware…

One of the biggest concerns for users online, is the ability of…