In a late earnings release on Friday, digital payments giant Paytm released its first earnings numbers after a rather dreadful public market listing in November last year. And the numbers are somewhat neutral.

To start with, there is a considerable jump in company’s revenues from operations. Paytm reported ₹1456 crore in revenue for the quarter ending December 31st, an 89% year on year growth. The company attributed this significant uptick to increase in merchant payments processed through MDR bearing instruments (Paytm Wallet, Paytm bank account, other banks netbanking, debit and credit cards), disbursements of loans on platform and recovery of commerce business from covid impact.

Losses however, widened too. Paytm reported losses of ₹778 crore, nearly double of ₹473 crore it reported in September 2021 quarter. In the December quarter of last year, losses were ₹525 crore, still much lower than what has been reported this time. Paytm has not provided any reasoning behind the same, but it is safe to assume that cashbacks and discounts on ecommerce continue to drill a significant hole in company’s finances.

Lending, a business arm that Paytm is hugeky banking upon for its financials to improve, has seen a big uptick. The lending business scaled rapidly over the quarter, with 4.4 mn loan disbursals through the platform, a 401% year on year. The value of these loans was ₹2,181 Cr, growth of 366% Y-o-Y. However, it is interesting to note that Paytm’s large share of lending was happening on the consumer front, rather than merchant front. Out of the total lent amount, ₹474 Cr was taken by merchants, while rest of it was disbursed using company’s buy-now-pay-later service and personal loans by consumers. 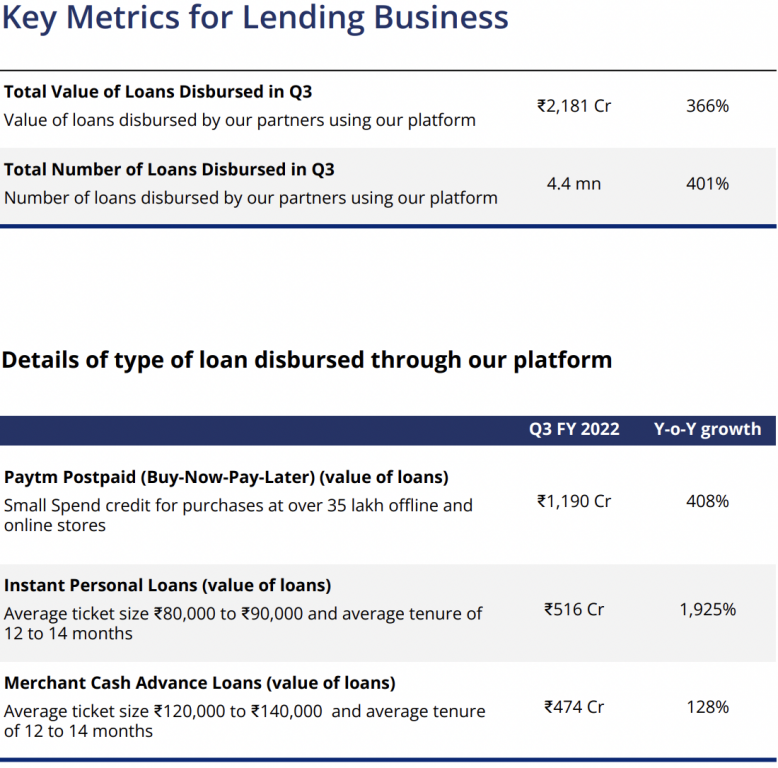 Paytm continues to see a strong growth in the overall user count, even though that really hasn’t translated to strong financials. Number of consumers on moved past 350 mn and merchant base has expanded to 24.9 mn (from 20.0 mn a year ago). Average monthly transacting users (MTU)in Q3 FY 2022 was 64.4 mn, growth of 37% Y-o-Y and 12% Q-o-Q.

The gross merchandise value (GMV) grew 123% year-on-year at ₹2.5 lakh crore during the third quarter. GMV, while does not translate to revenues, is still an important metric for fintech companies. It indicates the rupee value of total payments made to merchants through transactions on various platforms of Paytm over a time period. P2P money transfers are not a part of this figure.

Paytm said it is well funded with net cash, cash equivalent and investable balance of ₹10,215 crore, as of December 2021.

Four years ago, Snapchat CEO Evan Spiegel made the controversial statement that…