Paytm’s misery on the Indian public markets is seeing no signs of ending, at least any time soon. In what would be a new low for the already beaten stock, Paytm’s shares were trading at as low as ₹1139, a price that is nearly 50% of the IPO issue price of ₹2150. And there are all possibilities of the shares sliding even further. 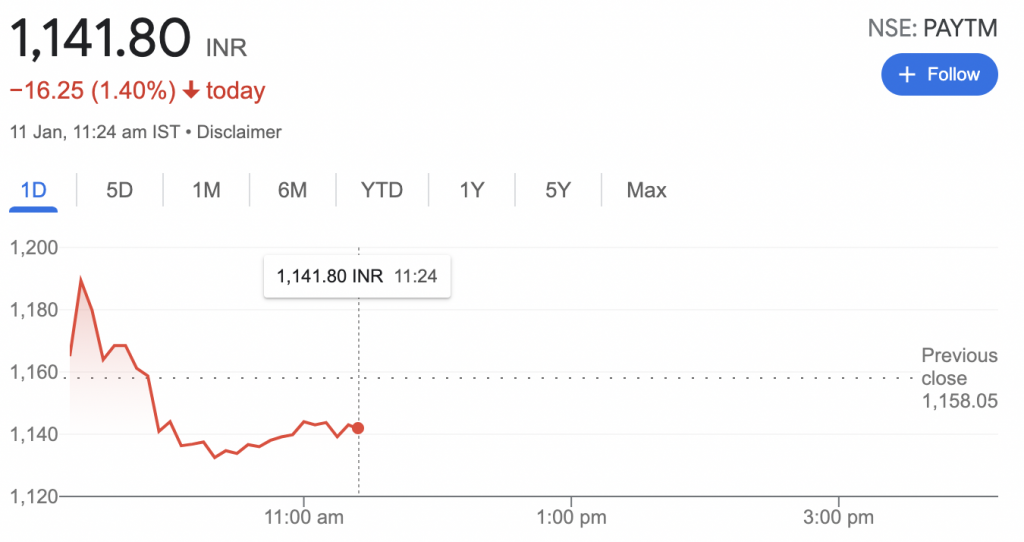 While the company is largely responsible for this demise on its own, Foreign brokerage firms, such as Macquarie, aren’t helping either. In a second such markdown on the share’s target price, Macquarie, whose earlier target was of ₹1200 on Paytm against the IPO price of ₹2150, further slashed its target price to ₹900, citing what it called limited potential to scale distribution business for merchant loans.

Not that these reasons were not known already, it is just that they hit much harder when brokerage firms come out loud and put the reality right there.

The share price slide has severely affected company’s valuation as well. It is now valued at less than $10 Billion, which is almost half of its peak private equity valuation. Paytm tried to assuage market sentiments by throwing out some GMV numbers late last year, but that too did not help. Soon after its listing, Paytm reported that its gross merchandise value (GMV) for the month of October 2021 amounted to ₹832 billion (nearly $11.2 billion). But of course, these are “GMV” numbers and are not even tiniest bit of close to company’s actual revenues.

Even when Paytm had initially sought to get listed on the public bourses, even the most optimistic of minds within the startup ecosystem had suggested to delay the listing. Of course all market-sensible minds almost stayed away from the IPO. But the pressure from investors and limited cash in hand to fund operations almost the digital payments giant to go for a listing. And while all other before it, Nykaa, Zomato among others had a more-than-decent outing, Paytm’s was reversed like hell.

Like the PC market, the global smartphone market fared well in 2021…

Last year was a strong one for the global PC market. According…