Windows 11 now official with new design, support for Android apps; Nadella terms it beginning of a ‘new era’ for Windows

Finally, Windows 11 is official. The announcement came in from Microsoft about a few hours ago, with critical details on the overall look and feel of this “new era” of Windows. Nadella, in a recorded address, made some indirect references to Apple, terming how Windows has been a ‘democratizing force’ for the world. And as dramatic as it may sound, software companies have become a ‘force’ in the world, and Windows does provide a more open alternative to Apple’s MacOS.

One of the most talked about changes to the new Windows, is the overall design aesthetic. It is clean, calm as an ocean and highly minimal — perfectly adapting to the design languages that are known to the world now. What that also means, is Microsoft has taken a leaf out of Apple’s design book, since such clean and minimal designs are synonymous with Apple’s software.

In fact, such is the focus on design, that one of the first thing you’ll notice about Windows 11 is that it includes a new Start menu and updated Start button that are both centered on the taskbar. It is pretty similar to the UI that we first saw in Windows 10X, a project originally planned for dual-screen devices that Microsoft eventually canceled. A lot of the UI work that went into Windows 10X is appearing in Windows 11. The design is also in-line with the giant Windows 11 leak that happened a few days back.

The Start menu has completely dropped the trademark tiled interface that Microsoft introduced with Windows 8. In fact, you would find the new start menu more similar to a typical Android launcher, with all app icons neatly placed one after the other. Much of the centered appearance is clearly influenced by macOS and Chrome OS, and Windows 11 also includes the rounded corners we’ve seen in both Android and iOS.

Windows 11 also gets a refreshed widget section, which, once again, will remind you heavily of what Apple offers on the MacOS. It is not a bad thing though, since Apple’s designs are the best in the industry, and it is good to take a leaf out of the same.

Microsoft is also improving the gestures you can use on tablets and the touch targets. Instead of flipping into a tablet mode, Windows 11 simply adapts to allow you to touch the OS easily. In terms of Accessibility, users will be able to create multiple work profiles across multiple devices, once again, similar to what MacOS provides.

One of the biggest announcements arguably, was the support for Android apps. Users can run Android apps (ofcourse those which have this functionality) on their Windows 11 devices. The Microsoft Store is redesigned and will support a whole host of apps that haven’t typically been available in the Windows app store. That includes apps from Adobe Creative Suite, and Android apps including TikTok and Instagram. 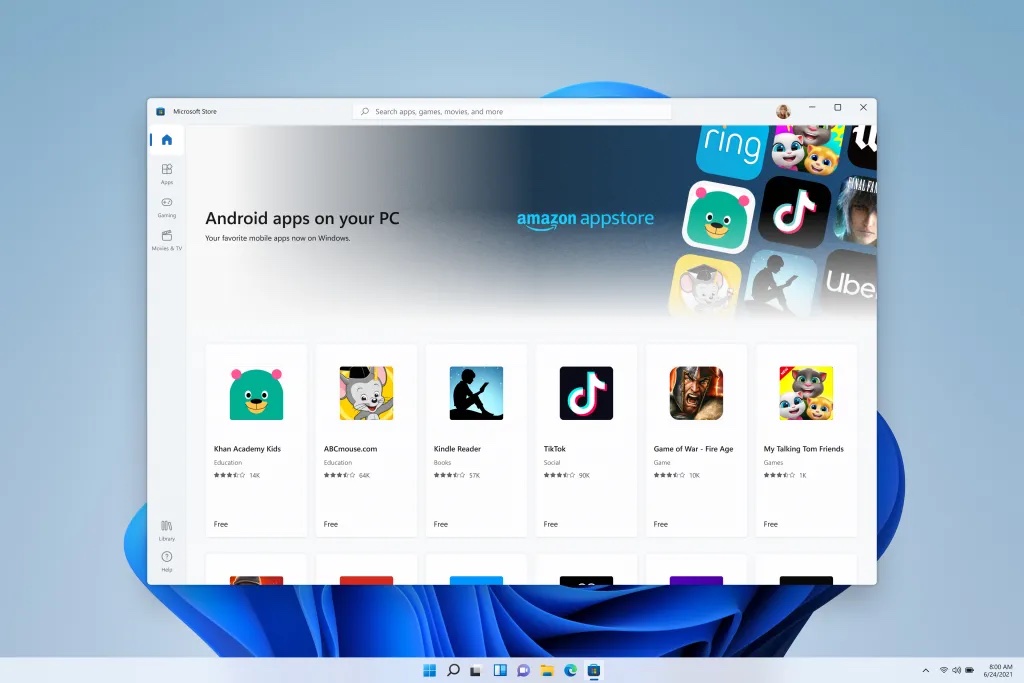 The move could be a game-changer, and could potentially open up Windows to a much larger section of non-productivity focused consumers as well. It has been a general complain, that Windows Store does not have some of the most common apps, specially around social media, gaming and more. This cross platform integration shall solve that.

Microsoft also announced that developers can use their “own commerce engines”, clearly a pot shot at Apple. Microsoft won’t take a cut; devs can even use their own payment systems if they want to. “Windows has always stood for sovereignty for creators,” says Microsoft CEO Satya Nadella.

There’s no release date for Windows 11 yet, but Microsoft has promised to make it available as a free upgrade to Windows 10 users this holiday.

Cryptocurrencies have been making their way into the mainstream slowly and steadily,…

The pandemic has brought forth a digital revolution, at the center of…