After a slow Q1 and a promising Q2, Q3 has seen stellar performance for the PC market, witnessing a 12.7% growth in shipments over the last year, breaking a 10 year long record. This, according to the report from Canalys, was fuelled by the COVID-19 pandemic as demand continued to surge due to second waves of coronavirus in many countries and companies continued to invest in longer-term transitions to remote working.

Notebooks, much like the previous quarters, benefited the most from this surge, as shipments reached a massive 64 million. This saw the shipments of notebooks and workstations grow by 28.3% year over year. However, this was compensated by a slowdown in sales of desktop and desktop workstation, which fell by 26.0%. However, with the launch of new GPUs and CPUs coming in the 4th quarter, there’s a high chance that this number will see a bump. 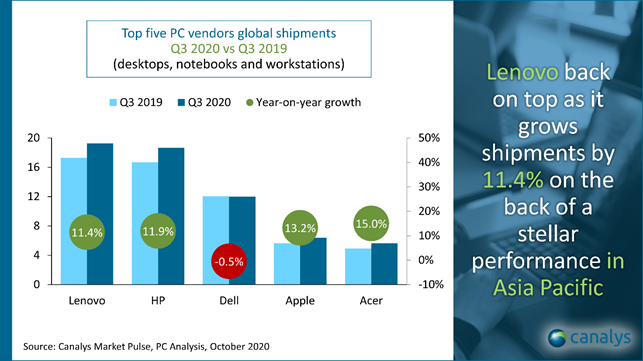 “Vendors, the supply chain, and the channel have now had time to find their feet and allocate resources towards supplying notebooks, which continue to see massive demand from both businesses and consumers,” said Ishan Dutt, Canalys Analyst. “After prioritizing high-value markets and large customers in Q2, vendors have now been able to turn their attention to supplying a wider range of countries as well as SMBs that faced difficulty securing devices earlier this year. Governments, which have realized the importance of PC access in maintaining economic activity during this time, have intervened with financial support or even full-scale device deployments. This has been especially critical in the education space, with school terms commencing in Q3 without the possibility of on-premises learning in many markets.”

According to Rushabh Doshi, Canalys Research Director, the pandemic will bring a revolution to our computers, forcing companies “to position devices towards a wide array of use cases, with a focus on mobility, connectivity, battery life, and display and audio quality.” Moreover, there will be an increased need for collaboration accessories, new services, subscription packages and a strong focus on endpoint security.

“Although the focus has been on commercial PC demand in the last two quarters, consumer spending during the holiday season is set to bring more joy to the PC market,” Rushabh added.

Facebook News makes its debut in the UK on Tuesday, its first…