In the mad rush of turning every last corner of some credible ‘social media’ stuff into more of that ‘social dilemma’ kind of stuff, LinkedIn too is joining in the rat race. The world’s largest ‘professional’ network, is now expanding its recently launched ‘Stories’ feature to India, along with 6 new localized stickers. The announcement comes just a few days after Stories first made appearance on the platform.

LinkedIn, a platform that started out as a place to hold professional discussions, has evolved into a digital workplace over the years, and much like every other workplace, is now looking to add some of that entertainment factor. The new Stories feature, although too ubiquitous at this point, works to the same avail, and hopes to make the platform more welcoming to new users.

Moreover, it can also be used to showcase professional highlights, including casual updates and experiences, start lightweight conversations, and offer a new way to stay connected with their network. But again, how the feature is utilized is up to users, and we all know where that can lead. Ashutosh Gupta, India country manager at LinkedIn did drop in a word of caution. “While Stories is an amazing way to share more frequently, make sure that you post with a purpose to avoid spamming your important connections”, he said.

The feature works similarly to every other Stories feature we have seen on other platforms. You can use it to send messages, , mention/tag connections, see who has viewed your Story, increase engagement, the whole shebang. Moreover, you can also use features like Question of the Day’, to ask members what they’re working on or how they recharge on their day off, and their Story responses help members start new conversations, acting as ice-breakers (much like the ‘Questions’ feature on Instagram). 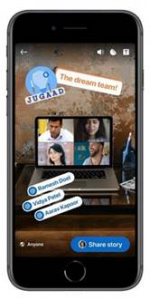 And of course, you cannot have a story without stickers. While announcing the feature for India, LinkedIn took special notice of its stickers catalogue and decided to add 6 localized stickers that aim to serve as quirky depictions of the work-life unique to the country. These are- Auto Rickshaw, Chai Time, Jugaad, Cricket, Yoga and India.

Then, there’s the new messaging, video calling (in partnership with Zoom, BlueJeans and Microsoft Teams) and changed search tool (which will not just show people and companies but also courses, events, jobs and much more), which you can read about here.

Meanwhile, while announcing the launch, LinkedIn’s India country manager threw in some interesting engagement numbers as well. “We are seeing record levels of engagement — from March 2019 to March 2020, we have seen a 60% year-over-year increase in content creation on LinkedIn, and we’ve seen a 55% year-over-year increase in conversations among connections on LinkedIn.”, said Gupta.

LinkedIn counts India’s burgeoning job market as a key demographic, and thus, the extra mile it went for the country makes a lot of sense.