The digital technology uprise in India has paved the way for a surge in growth of datacenter industry in the country. According to S&P Global Market Intelligence, the datacenter market in India is growing roughly three times faster than the global market, matching China’s growth rate. The 2020 India Leased Datacenter Market Report by 451 Research(a subsidiary of S&P Global Market Intelligence) states that the fastest growing region across the globe in this industry is Asia-Pacific with a CAGR of 10% (2017-2022).

The firm figures that while the global datacenter industry grows at a compound annual growth rate (CAGR) of 7%, India’s datacenter industry is growing at 23% in the same time. This development in the datacenter industry of India can be credited to various factors. One of them is the impending data sovereignty laws under the Data Protection Bill that will mandate certain class of data to be stored within the Indian borders. A number of government backed initiatives and incentives, such as allowing global digital companies to conduct business and setup servers in India, and governments programmes like the Digital India programme, have contributed as well.

Dan Thompson, Principal research analyst at 451 Research, S&P Global Market intelligence says, “Digital initiatives from the government and enterprises will continue to draw more technology and datacenter companies to India and accelerate market growth in the region”. He further adds, “We expect an influx of datacenters will come online in the next few years, where the increased competition will certainly result in better, high-quality facilities in the market and more competitive pricing.” 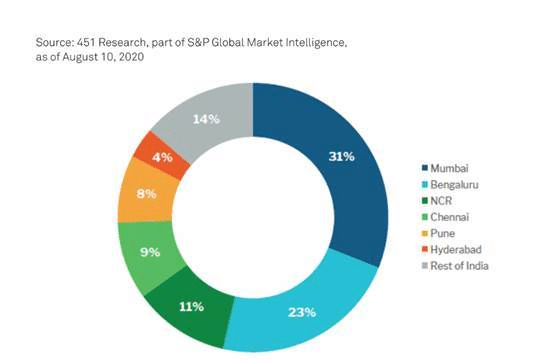 Key findings from the report suggest that 88% of India’s supply is in large metro cities such as Mumbai, Bangalore, New Delhi and Chennai, up from a year ago due to increased infrastructure disparities.

The digital economy of India is predicted to be valued at $1 trillion by 2022 and, as mentioned earlier, will attract various global players over the years. This growth in the datacenter industry of India will be welcomed by the potential global digital companies who look to setup their operations in India.