The smartphone market in India performed exceptionally well in Q1 2020, despite the nationwide lockdown that was imposed in the last week of March. The industry as a whole grew by 12%, reporting 33.5 million units sold in the first quarter, according to a new report by research firm Canalys.

Perhaps the most interesting development has been Samsung’s degradation to the third spot, with Vivo becoming the 2nd biggest smartphone maker in the country. This is based on Q1’20 shipment volumes.

Xiaomi maintained its spot at the first place, ruling the market with a fair bit of distance from Vivo. The company’s continued investments in local production and supply chain, coupled with an efficient online and offline channel strategy, bore its fruit. Xiaomi continued to sore on the high it has been on for years now. The company achieved 30.6% of the market share, shipping out 10.3 million smartphones. Its competitors had varying fortunes though.

Vivo grew shipments by close to 50%, while Samsung saw a decline of about 14%. Vivo managed to end up with just a little less than 20% (19.9) of the market share (a personal best). Samsung on the other hand, was left to bite the dust at 18.9% market share. Both vendors shipped 6.7 million and 6.3 million units respectively. 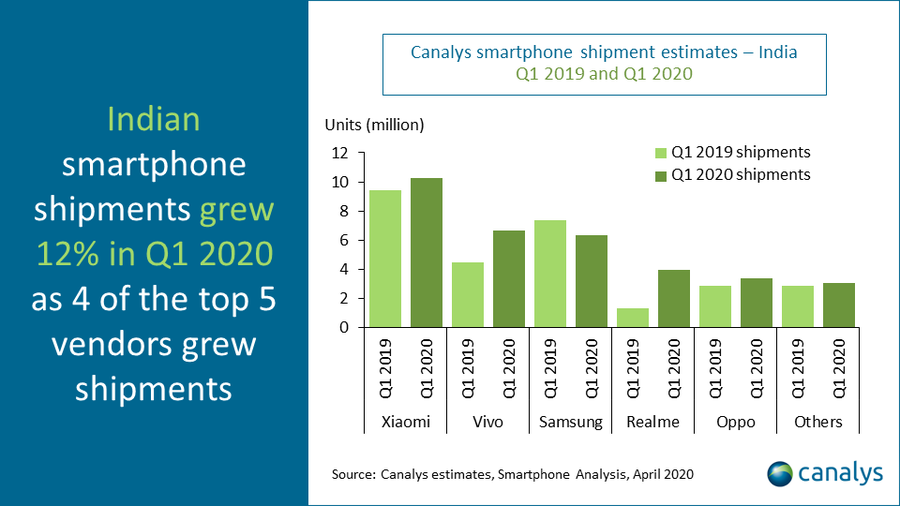 The battle for the positions that followed was a little less intense, with both RealMe and Oppo retaining their positions at 4th and 5th on the table. With a 11.7% market share and 3.9 million units sold, RealMe grew by 200% annually. Oppo shipped 3.5 million devices and managed to bag 10.4% of the market share. The company managed to grow 22.4% on an year on year basis.

Canalys experts however suggest, that the growth in the market is not sustainable. “While parts of India emerge out of the lockdown and the government works out an exit strategy, worker availability, which depends heavily on opening state borders and allowing public transport, will be a key issue for vendors and ODMs. Additional manpower regulations due to COVID-19, like in China, is likely to slow down resumption activities in factories across India, directly impacting production capacity.” says Canalys Analyst Madhumita Chaudhary.

Chaudhary however, is optimistic on consumer demand growing back to usual numbers. “Consumer demand, however, is likely to be more robust. Online channels are likely to emerge the winners as public fear of the virus deters consumers from buying offline”, she added.

She also said that Vivo’s victory is “bitter sweet”, and that the company’s offline inventory will become a bother to get rid off. Vivo stocked up on phones for the IPL season, which seeing how it has been cancelled, will be not very enthralling.

With COVID-19 changing the global work order, most companies have turned to…