As the world continues to grapple with an increasingly spreading Coronavirus outbreak, business impact has become clearly visible. And it becomes more visible for U.S. tech firms, as almost all of them source their entire manufacturing from China.

Several economists are now warning investors of a prolonged hit to equity prices as the outbreak spreads further around the world. The S&P 500 could slip to its lowest level since June on virus fears, Goldman Sachs said in a Thursday note, adding that US firms will fail to grow profits in 2020. Former Federal Reserve chief Janet Yellen alerted on Wednesday that the US could fall into a recession if the coronavirus epidemic escalates.

Amid this ongoing economic meltdown, Microsoft on Thursday reported a 4% downfall in the shares after it warned of a hit to its PC business supply chain due to the virus outbreak, something Apple and Hp also had announced earlier.

The precipitous sale of shares saw Microsoft lose $62 Billion of its market value amid announcements of declined profits in the first quarter of 2020 citing longer than expected restoration times on supply chains, with its Windows and Surface computer business worst hit. 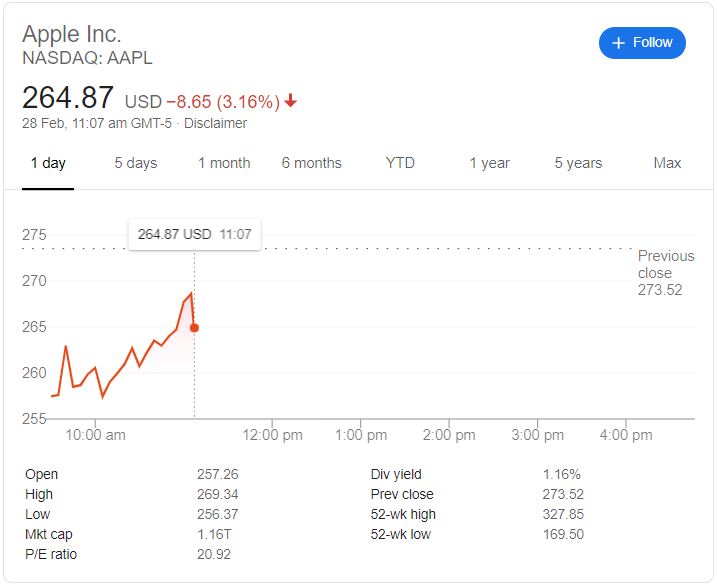 The impact of the virus has been pan-industry with many other big names also reporting similar losses. Apple had also adjusted its forecasts for the upcoming fiscal quarter as its supply chain in China is affected. The company had closed its retail operations amid the outbreak with no restoration insight as the virus continues to spread.

Apple Chief Executive Officer Tim Cook said in an interview with Fox Business Network, “It feels to me that China is getting the coronavirus under control,” adding that iPhone components come from the United States as well as China.

Cook told the network that iPhone factories in China have re-opened and are in “phase three of the ramp mode” of returning to normal operations. 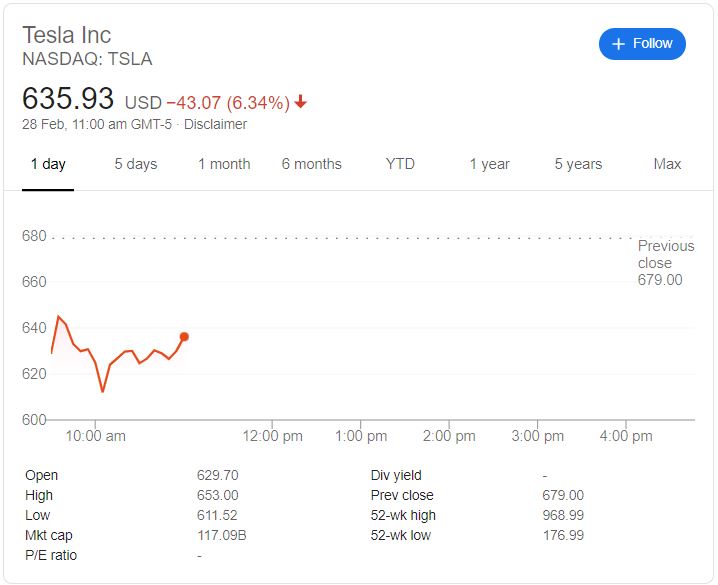 Elon Musk’s Tesla is another company that has seen massive blows to its share price and hence its market cap. At the time of writing, Tesla shares were down as much as 7% owing to production halts at its gigafactory in Shanghai. The Shanghai gigafactory was completed in record time and was expected to bear the most of Tesla’s production load for sometime. The stock was on a bull rally until recently, when it reached an all-time high of $968.99. Fast forward to now, and the company is trading in mid $600s.

Mastercard also echoed similar concerns. The credit card company expects quarterly revenue growth to slow by 2% to 3% if the outbreak continues to grow at its current pace. Coca Cola also forecasted a 1% to 2% dip in revenues.

A similar plight is shared by Dell, the third-largest PC maker after Lenovo and HP. The company is set to report its quarterly earnings after the markets close on Thursday.

The stock values have been plummeting for a while now, owing to fears of the rapid spread of the virus in other parts of the world- tech stocks being the worst hit. Chinese President Xi Jinping over the weekend had confessed that the coronavirus had “a relatively big impact on the economy and society”. Xi said that the government was already acting on a war-footing basis to minimize the damage to businesses around the country.

International Monetary Fund chief Kirstalina Georgieva said that the global lender was ready to step in to mitigate the blow emerging market economies may face from the virus. “Global cooperation is essential to the containment of the Covid-19 and its economic impact, particularly if the outbreak turns out to be more persistent and widespread,” Georgieva was quoted as saying in the Guardian.

But the assurances haven’t really been able to pacify the investors. The panic selloff of shares continued on Friday morning as well with US stock market opening at 3% lower than a day before. If the current skid continues, it would mark one of the worst weekly downfalls in the US stock market history.