We finally have yet another member joining the exclusive and highly elite trillion-dollar club of companies with market valuations over $1 Trillion. It is a significant milestone for the Google-parent and comes at an extremely crucial time for Sundar Pichai. It looks like his elevation has gone down pretty well with the wall street.

According to Reuters, shares of the Internet search giant are up nearly 17% over the last three months, outpacing a broader rally in the S&P 500 index over the same period by 6 percentage points.

Pichai, despite a few of the recent work culture controversies in Google, is considered an able business-minded leader by the investor community. Many expect, that his sheer focus towards driving revenues is one of the reasons why investors have been in a cheery mood ever since his coronation. For the tech enthusiasts though, this also means that Pichai could axe or substantially curtail operations of a slew of Google-run moonshot projects.

What investors also seem to like is the fact that Pichai’s salary is linked directly to the company’s performance. While his base salary is capped at $2 million, he’s expected to earn much more — at least $150 million — if the company hits certain performance targets this year, next year and in 2022.

Let’s talk a bit about the trillion dollar club now. Its a highly elite, exclusive grouping currently comprising of four companies globally, including Google. The grouping has Apple, Microsoft, recently IPOed Saudi Aramco and now Google as its members. Apple, saw its market cap soar past $1 trillion for the first time in August 2018. Amazon too entered the club for a brief time period, eventually pushed out.  Saudi Aramco entered the club with its recent, $1.27 Trillion IPO. Microsoft has been a member for quite some time now. 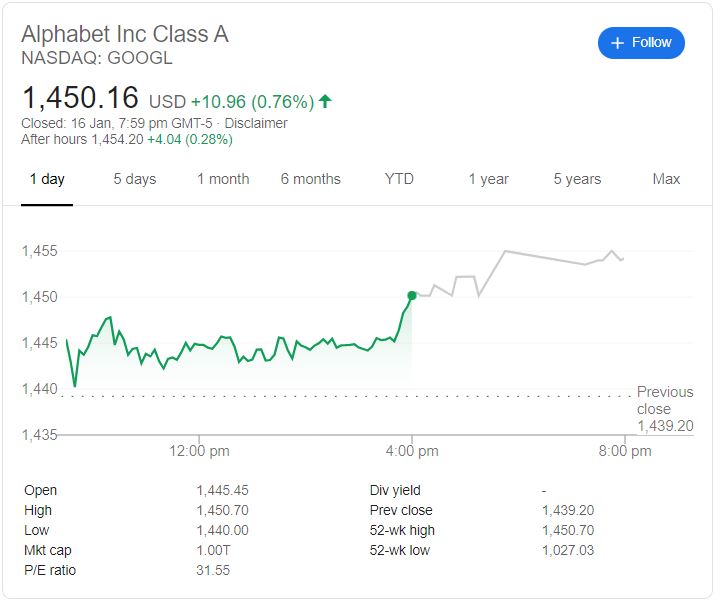 How long will Alphabet stay in the club? Well, that’s a question best left to investors and portfolio managers. Alphabet is scheduled to report fourth-quarter earnings on Feb. 3. In its last reported earnings report, the company missed analysts’ estimates for third-quarter profit by about $1.7 billion, though it beat revenue expectations. That however, doesn’t seem to have gone too bad for the company, at least in investor eyes.