Before jumping in, we’re assuming y’all aware that Facebook has shamelessly copied and baked in Snapchat’s most prominent Stories and camera features into each of its apps. Yes, everything from the core Facebook app or Messenger to WhatsApp or Instagram, they all now mostly look like Snapchat clones. And Snap CEO Evan Spiegel has finally addressed the copy-paste tactics being adopted by its arch-rival Facebook during its first-ever quarterly earnings call after going public.

During the investor/analyst/media call, Speigel was directly questioned about the social media giant’s tactic of copying features straight from Snap’s ephemeral messaging app. He was asked whether Facebook’s surprising (or not so surprising one, as Facebook is known to have tried to acquire Snapchat) intervention into their territory scares him or not. He was even bluntly asked to justify his response for the same.

The Snap CEO remained unperturbed with the question and laughed it off the instant it was served to him. He played forward the importance of being creative rather than copying ideas and building a product (which is true for most Indian startups, who have copied business models from the West, tweaked them a little for India and are now facing growth struggles).

Similarly, Spiegel thought it was wise to explain the situation using an example while hitting against Yahoo — who’s recently been acquired for $4.48 by Verizon — as well. He said,

At the end of the day, just because Yahoo, for example, has a search box, it doesn’t mean they’re Google

While Spiegel has boldly dropped such a comparison, bringing in tech bigwigs such as Yahoo and Google into the mix, during the investor’s conference meeting after releasing the quarterly results. This shows that he hasn’t lost his cocky nature that we’ve already heard about and is betting on ‘creative’ features to take lead over Instagram Stories — which is a close copy of their Stories feature but now with more monthly active users. It presently has close to 166 million MAUs, which is saddening and depict slowdown in growth. This has resulted in Snap’s share prices crashing down, spiraling down about 23 percent in after-hour trading while also nearing its $17 IPO price. 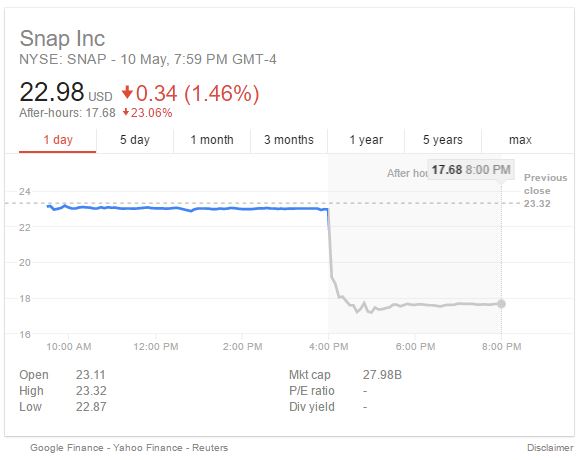 Here’s the complete statement that was spoken out by Spiegel against Facebook’s shameless tactics, which gives Snap a pride over the innovative product, with exclusively new features, they’ve developed:

If you want to be a creative company, you gotta get comfortable with, and basically enjoy the fact that people are going to copy your products if you make great stuff. We’ve seen this happen a lot in technology. When Google came along, everyone really felt like they needed a search strategy. When Facebook came along everyone felt they needed a social strategy.

And now with Snap, with our company, we believe that everyone is going to develop a camera strategy because I think we really help people understand how valuable the camera is. It’s really the center of everything that we do. At the end of the day, just because Yahoo, for example, has a search box, it doesn’t mean they’re Google.

In addition, Facebook CEO Mark Zuckerberg has also answered to allegations against blatant criticism that they’ve copied most of their camera features from the competitors, especially Snap. During the F8 developer conference earlier last month, he mentioned that the features already implemented into the apps was just a stepping stone. And it surely seems to be the case as Facebook is now placing immense focus on augmented reality camera applications.

Amid a significant decline in stock value, existing large shareholders of numerous…