Twitter is exploring a paid subscription service, for an enhanced TweetDeck experience

Well, it seems Twitter hasn’t completely forgotten about TweetDeck and is mulling the decision to revamp the user experience for this extensively popular Twitter client. But instead of adding just new advanced features and powerful analytical tools, the micro-blogging platform is now considering to offer the same at a price. Yes, it would be their first paid subscription service.

Word on the street is that Twitter is currently sending out survey forms to select power users of their platform. It is not only detailing their vision of building a “more advanced” version of the existing TweetDeck client but also asking the features you’d like to see added to the same. This version of the service promises to bring along a broad range of “valuable viewing, posting and signaling tools” for that part of the community looking to get more out of their Twitter experience.

However, the biggest question being thrown at these individuals is whether they’d be willing to pay a subscription fee for this premium offering. As for the premium features that can find their way into the full-featured paid client, there is a long list. This development has been shone light upon by journalist Andrew Tavani through the help of a series of tweets.

Scoop: Twitter is developing an ‘advanced TweetDeck’ that would be available for monthly subscription fee & feature a range of new features: pic.twitter.com/MlKw8xZlVS

2 more notes on ‘advanced TweetDeck’: 1. Monthly subscription fee Twitter is exploring in the survey is $19.99. 2. Complete list of features pic.twitter.com/YEOf9AQ9bt

The survey is even being accompanied by a sample screenshot of how the new TweetDeck experience will probably look like after the revamp. And it feels a lot closer to an advanced iteration of the micro-blogging platform’s Windows 10 desktop application. Here, the company also seems to be pitching different subscription charges for the advanced TweetDeck experience, to better comprehend the user’s mindset. Tavani’s survey said that the service might cost $19.99, while others have seen charges as low as $4.99.

The new features that’ll help the subscription service set itself apart from the existing client are – personalized breaking new alerts or summaries, advanced tweet/follower analytics tools, advanced tracking, the ability to cross post to other social media platforms, and import user lists from external sources among others. Most importantly, it will be an ad-free experience aimed at marketers, journalists, and other power users. 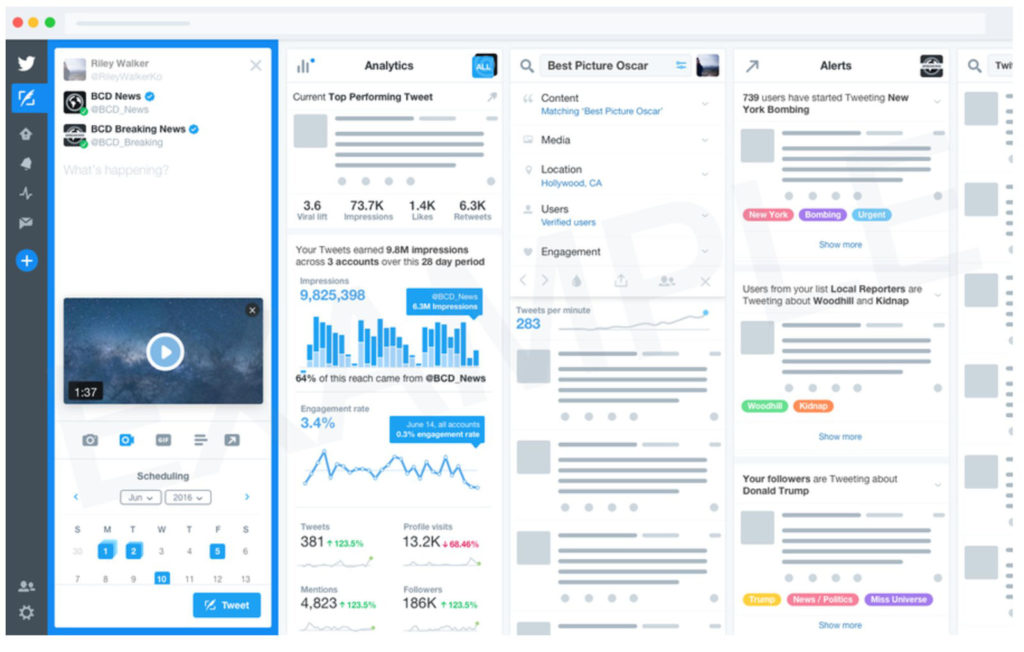 For those unaware, Twitter acquired TweetDeck back in 2011 for $40 million. But, the client has continued to exist with sparingly any improvement or feature addition. This would have to be the very first time that the company is diverting its attention at bulking up the prowess of the same.

This development also comes on the heels of the company’s failed attempt at offering a singular, ad-free and robust platform for the ease of power users. This was called Twitter Dashboard and has now been shuttered because it failed to get off the ground and attract users towards itself. Twitter has then asked Dashboard user to make a switch to their TweetDeck client, and that might’ve sparked the idea of making the service a subscription package. Twitter co-founder Ev Williams could also be behind this addition because he has just recently added the same to his blogging platform Medium as well.

Well, we’d like to leave you with a question. Are you willing to shell out a hefty $19.99 for an ad-free TweetDeck subscription service? Comment your thoughts down below.

With people spending time at homes, the strong growth of the streaming…